Have you ever laid eyes on a robot and felt uneasy, like it was almost also Human-Like? If so, you have discovered what is called the Uncanny Valley.

This is a theory that dates back to 1970, highlighting an increasing level of discomfort as a robot acquires the characteristics of a human.

So why do we feel this? And is there a way to avoid this in an increasingly robot-centric world?

What is the Uncanny Valley?

A theory popularized by Japanese roboticist Masahiro Mori, the Uncanny Valley offers a graphic of how we see robots. This obviously suggests that the more a robot looks like a human, the more familiar we will find it.

“However, Mori noticed that there was an exception to this. At some point, if an artificial agent looks too much like a human, then that kind of affinity or sympathy reverses and creates feelings of strangeness. , even repulsion. And this became known as the Uncanny Valley theory,” says Fabian Grabenhorst, professor of experimental psychology at the University of Oxford.

In this valley, a robot resembles a human enough to feel familiar, but at the same time it is fundamentally different, eliciting an uncomfortable feeling that marks this robot as seeming strange.

There are many examples of this that you may have seen. Engineered Arts, for example, has made many, as has Hanson Robotics with the Sophia robot, or more recently the Ai-Da painting robot (more on this below).

All of these robots possess clear human qualities in the way they look, talk, and move, but are still very robotic in those characteristics.

What causes the Uncanny Valley sensation?

So far, there has been no definitive reason why we experience this uncomfortable feeling with realistic robots. However, many plausible explanations have been explored and it is most likely a combination of a few that make up the sentiment:

The area with the most research currently, the neurological perspective suggests that the feeling of the uncanny valley is caused by signals activating in the brain.

Cognitive psychology researcher Fabian Grabenhorst with a team of neuroscientists investigated the neurological aspect of Uncanny Valley in a 2019 study.

“Coming from this angle rather than from the angle of roboticists or psychologists, I would conceptualize the Uncanny Valley as a neural response to a particular combination of characteristics,” says Grabenhorst.

“For example, you can imagine a neuron in a particular part of the brain that responds more strongly the more human a social partner seems, and that will then be one of the starting points for calculating the strange valley.”

These characteristics he refers to are the high human likeness combined with the fact that they are not human in any way.

In the 2019 study, the team studied the brain patterns of 21 people during two separate tests using functional magnetic resonance imaging (fMRI), a way to measure changes in blood flow to different regions of the brain. .

During early testing, participants saw images that included humans and a host of different types of robots, all representing different levels of human-likeness. The second test asked which of these robots you would trust to select a personal gift for them.

Participants turned to humans and more human robots for this task. However, the exception were those closest to the human/non-human boundary that participants felt uncomfortable with.

The researchers measured brain activity during this task and were able to determine that the activity was in areas related to processing, evaluating social cues and facial expressions.

Along the midline of the frontal lobe there is a part of the brain known as the medial prefrontal cortex. Previous research has shown that this region contains an evaluation system that judges stimuli. It has been shown to signal the reward value of everything from milkshakes to social stimuli of pleasurable touch.

In the study by Grabenhorst and his team, two parts of the medial prefrontal cortext — a key part of the brain for attention and the senses — were important for Uncanny Valley. One part converted the human-likeness signal to a “human detection” signal, with this region over-emphasizing the boundary between human and non-human – reacting more positively to humans and less to artificial figures.

The other integrated this cue with an assessment of sympathy, producing a distinct pattern that closely matched Uncanny Valley’s feelings.

One of the best-known psychological explanations comes from the legendary Sigmund Freud, but no, it has nothing to do with your dreams or your mother. In 1919 Freud wrote an article in which he refers to a strange emotion that humans have which is aroused by certain objects.

Obviously at the time he wasn’t talking about robots, but he did mention realistic dolls and wax figures that would convey the feel we have with robots today. This might suggest that this feeling runs deeper than robots and that we have been experiencing it for years.

Freud suggested that this experience we feel could occur when there is doubt that something inanimate has a soul. Obviously, this isn’t the most scientific approach to the concept, but there is a clear connection between the two. Especially when a robot looks so human, there is a level of doubt as to whether it is a robot or not.

Another theory that has been proposed relates to an evolutionary advantage. The kind of robots that drop into Uncanny Valley will look like humans, but with something clearly wrong with them.

Whether it’s because their skin looks lifeless, their features are transformed, or some other slightly off factor, it could trigger an evolving sense of aversion or disgust. The rational being that there is a survival advantage in these feelings to avoid infection or contamination from a sick human or animal.

There are a number of cognitive theories regarding Uncanny Valley. Most of them revolve around self-preservation. For example, in his original article, Mori referred to a human self-preservation instinct that automatically causes this reaction.

There is also another theory that suggests Uncanny Valley is caused by an existential fear of being replaced by robots. This goes hand in hand with another idea that when we see a robot that looks like us, but is clearly not human, it causes a violation of our expectations or standards of how humans and robots look.

This fuels a particular concept known as “prediction error” where robots cause an error in our predictions of what a human should be like, leading to the Uncanny Valley feeling of unease.

Famous examples from the Uncanny Valley

A robotics company based in Cornwall, England, Engineered Arts has been making soft robots for years now. One of its latest models, known as the Ameca, shocked the world when videos emerged of it reproducing human emotion.

In these videos, the human-looking Ameca showed surprise, moved his body to mimic a human, and even laughed. While this is one of the most realistic attempts at human emulation robot, it certainly falls down the Uncanny Valley.

Another well-known robotics company is Hanson Robotics. They created a number of realistic robots, including – Sophia. This robot was activated in 2016 and was modeled after Queen Nefertiti, Audrey Hepburn and the creators wife.

Besides the highly visible clear wiring in the back and the plastic arms, Sophia looks very human, almost like a wax figure. Watch her move and you’ll likely experience the same spooky feeling that the eerie valley describes.

Geminoid HI-1 is perhaps one of the scariest robots to have plunged into Uncanny Valley. It is an Android copy of its creator, Hiroshi Ishiguro. He copies his voice and head movements and was created with the aim of questioning what it means to be human.

Ai-Da is a human-like robot… with cameras in his eyes. It is designed to be the first “ultra-realistic artist robot”. She draws using the cameras in her eyes, artificial intelligence algorithms and a robot arm.

She has now held a number of art exhibitions around the world, and while she certainly looks human, Ai-Da has a face that will leave you wondering about it all!

Can a robot get out of the valley?

Is there a way to avoid this big drop when creating a bot? Arguably the best way for researchers to do this so far is to deliberately specify that it is a robot that you are interacting with.

“In his original paper, Morrie advised fellow roboticists not to make artificial agents too perfect. Emphasize in the design that they are not human to avoid this ambiguity,” says Grabenhorst.

There’s a comfort level in there for humans. When there is an identifiable factor indicating that it is a robot (exposed wires, metal parts, etc.), it takes away the strange feeling slightly.

But what if a company wants to make the most realistic robot and doesn’t want people to feel uncomfortable? It’s possible that through exposure, we’ll just become more comfortable with human-like robots.

“We know that activity in brain areas associated with the Uncanny Valley can be altered by experience, especially also by social experience. This remains to be tested and would be a great experience to do.

“But one could predict that the activity in these brain areas would adapt over time as you have positive experiences with these human-like artificial agents. I wouldn’t rule out that there remains a residual tendency to dislike highly human artificial agents,” says Grabenhorst.

About our expert, Fabian Grabenhorst

Fabian is Associate Professor of Experimental Psychology at Oxford University. In 2019 he completed a key study on the Uncanny Valley

– Should we be afraid of human androids – In the future, you will share your work with robots…unless you are a woman – This shape-shifting technology allows terrestrial robots to transform into flying drones 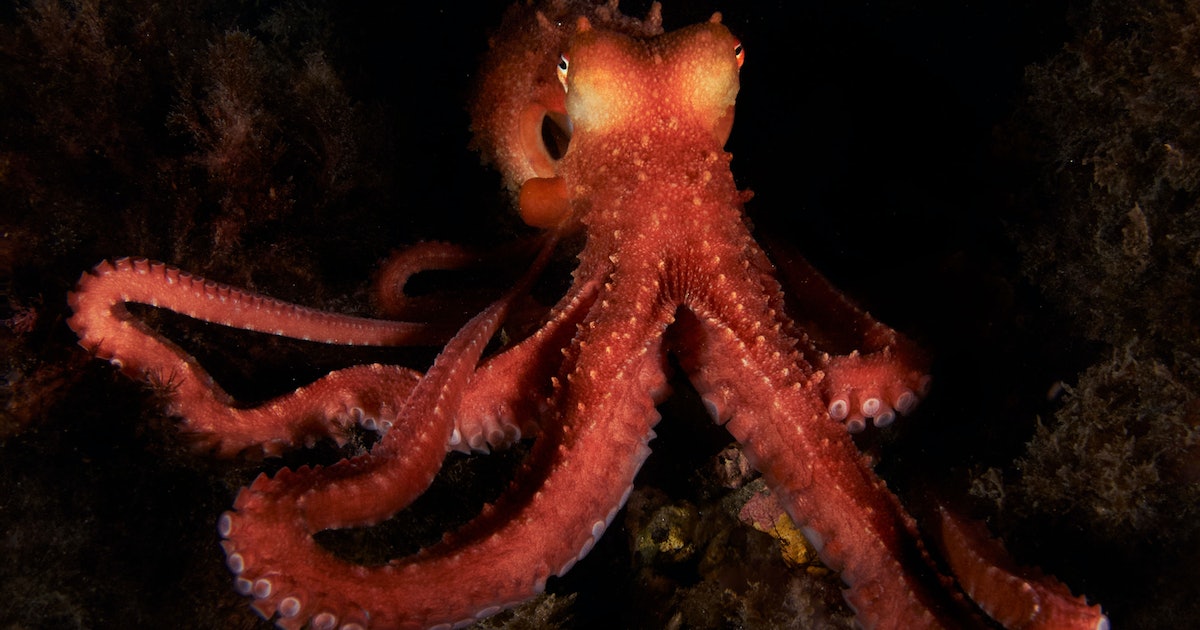 5 amazing things you didn’t know about the cephalopod

Satellogic will launch 68 satellites with SpaceX